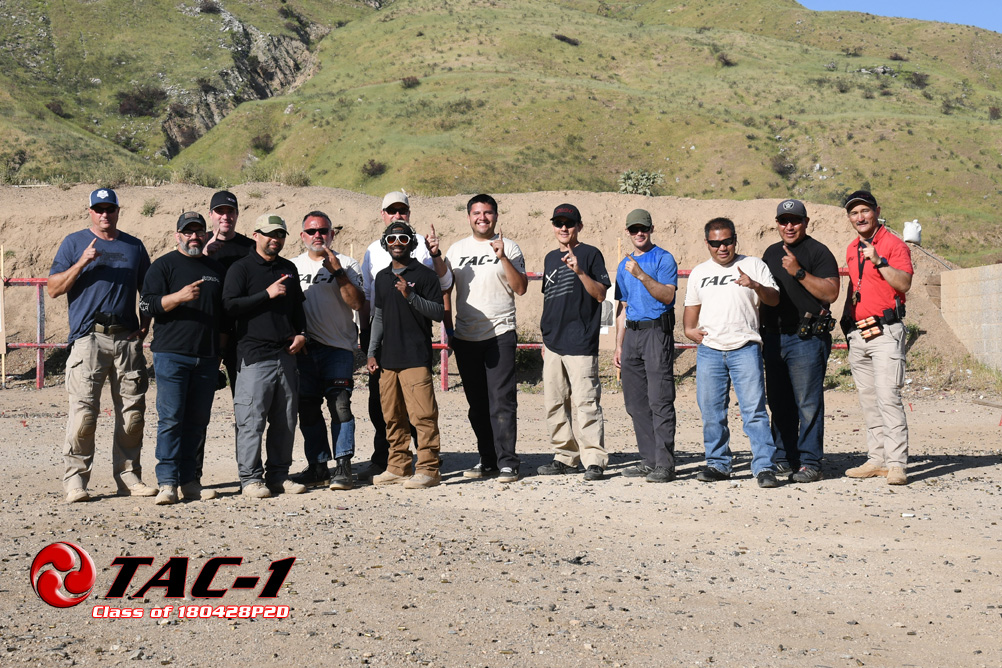 Another successful Examination and Certification class at TAC-1.  This session took place at Angeles Shooting Ranges Eagles Nest “B” in the mid 70’s temp with slight wind – nothing to note.  There were total of 15 attendees with two of them (Gio and Trey) not shooting for score.  This class allowed members to register as Workshop only format where students can practice the course of fire without the added stress.

The test format from 2017 was used for this test with only a slight modification in the Combat Course #2 (CC2) portion where LAPD Qualification Phase #1 was replaced with 12 rounds in 35 seconds from 20 yards. This was to test their abilities from distance and assess their skills to alter their timing for the difficult shots.

There were total of 3 Brown belts and a Purple belt in attendance. Interestingly, Erich beat out Chris Weir in the final score proving that Erich who shot his CZ 75 BD 9mm is still in his top game. Chris had to change his compact Glock with a RMR due to his visual concerns.  Paul Luna once again came in top 2 despite problems with his CZ 75 SP-01.  Paul had to switch to his M&P 9 pro to finish off the test.

Dave Shaw took first place with only an Expert score shooting in the 91 percentile. Dave shot his stock Glock 19 and stayed true to defensive shooting. Congratulations.

There were several promotions that’s worth mentioning. Our new Blue Belt holders are Nate, Shin, Shawn and Doug shooting in solid Sharpshooter category. Although, my mistake Shawn was not mentioned during the class, he had shot a total score of 1687 with his XD 9mm Compact which placed him in the 84 percentile – well within the Sharpshooter category to earn him the Blue belt.  Shawn has been with us for at least 2 years training in the art of gun fighting.

Along Shawn were Nate, Shin, Eddie and Doug whom all deserve the new rank as a Blue Belt.  They had put in a tremendous amount of work in the past several months.  Their hard work were clearly depicted in their accuracy and in their operation of their handgun.